Mythologically Magical Peru (Work on this don’t love it)

Imagine sauntering through majestic landmarks, frozen in time, enveloped in the spirit of an ancient culture and steeped in geographical splendor. Inspiring views and unique adventures found nowhere else in the world are a mere 6-hour flight from the USA to present a lifechanging adventure closer than you thought possible.

These custom-made travel experiences are created with a meticulously crafted commitment to the incentive traveler.

Our Destination Managers are highly experienced incentive professionals as well as amateur archeologists, history and culture enthusiasts, generational specialists of the deepest secrets the country holds, each designed to an enhanced experience seared in your hearts forever.

Meaningful and enticing trip enhancements are personally vetted and selected to maximize the incentive traveler experience.

Lima, is the capital and the largest city of Peru. It is located in the valleys of the Chillón, Rímac and Lurín rivers, in the central coastal part of the country, overlooking the Pacific Ocean. Together with the seaport of Callao, it forms a contiguous urban area known as the Lima Metropolitan Area. With a population of more than 9 million, Lima is the most populous metropolitan area of Peru and the third-largest city in the Americas, behind São Paulo and Mexico City.

Nestled in the Andes, Cusco is one of the most fascinating places in the Americas, which never fails to surprise visitors with its mystery-filled ancient history. With its excellent hotels and restaurants, this city is full of amazing places to see.

A product of the fusion of Inca and Hispanic culture, Cusco has been declared a World Heritage Site. We can feel the magic of the impressive legacy of Inca culture, as we walk through its streets and its fascinating stone passages, as we visit its colonial mansions built over the remains of Inca structures, and as we explore its imposing fortresses and majestic citadels.

An extraordinary city, with more than its fair share of places brimming with mysticism and grandeur, such as the Koricancha or Templo del Sol, which is said to have featured entire walls covered in gold, or the Twelve Angle Stone, or the fortress of Sacsahuaman, which all showcase Inca ingenuity used to build structures with enormous carved rocks joined together with the utmost precision; or the Cathedral, the La Merced church, and the famous San Blas pulpit, legacies of colonial religious art and architecture. The surrounding area also features Inca remains such as Tipon, Pikillacta (south of the city), Tambomachay, Quenqo and Puca Pucara.

Cusco is also the gateway to the Sacred Valley, which was the Inca’s favorite spot. It is a vast area with picturesque towns and dream landscapes, featuring the Urubamba or Vilcanota River flowing through from the town of Pisac to Ollantaytambo. It is a fertile valley with a maze of platforms devoted to agriculture, and which is still in use today, for the cultivation of products such as potatoes and large-grain corn, the main source of sustenance for the Andean population and the only one of its kind. The Sacred Valley also features the Moray complex, an ingenious system of circular platforms used as an agricultural laboratory for the climate adaptation of species from other ecological areas. The Valley now has an exceptional travel infrastructure that attracts visitors from all over the world, and in addition to the archaeological attractions, it is also possible to go canoeing, mountain biking, hiking, among other adventure sports.

The Sacred Valley of the Incas is a place where you can enjoy the landscape, learn about the customs of the indigenous people, and have the experience of a lifetime.

Jorge Chavez International (LIM) is the largest airport in Peru and is based in Lima with flights to 72 destinations with 27 airlines.

Ideal for late arrivals to the gateway city of Lima for next morning connections to the nether regions of Peru to begin your great adventure.  Located in airport this clean pitstop hotel boasts great food and attentive... 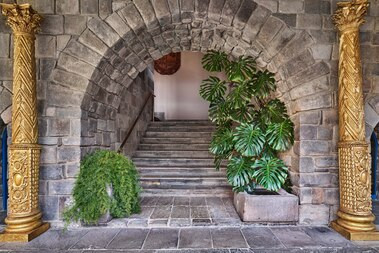 A tour full of living history, present in every corner.

A storied mansion dating back nearly five centuries, Palacio del Inka stands in the historic center of Cusco. Directly across from the...